Back to Genealogy Front Page 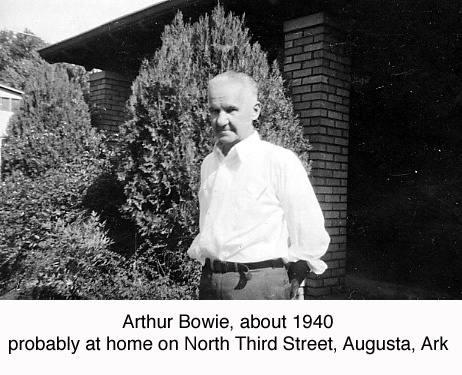 Video of Arthur and JoAnne Wedding Feb 23, 1979. A gathering of most of our Bowie's.


Extended Family Here are my more than 1,650 families which include over 5000 individuals, whom mostly connect at my generation. Some don't connect but may be friends or historical interest. This presentation doesn't include any living people and is visible to most search engines.

I'm a Bowie, I've worked on Bowie genealogy longer than any other in this collection, and we have pretty good information of over 100 Bowies. But, almost nothing on my direct Bowie ancestors before 1901. The first public record I've found of grandfather Arthur Bowie 1881-1941 is a newspaper clipping of his arrivial in Newport in 1901, where he lived most of his life. The obit for his mother Caniza Reeves in 1906 gives some names and infomation that census confirms. Both granddad Arthur, his mother Caniza, and his nephew Fred Seaton, son of sister Alice, are buried in Walnut Grove Cemetery, Newport, Arkansas.

My first DNA test was with Ancestry in August 2018 which confirmed the families we already knew but had many matches that could not be connected, and no Bowie/Buie/Bouy/Bouie matches. Because the 1880 census and the 1876 marriage raised very different questions, I did Y-DNA test with Family Tree DNA in December 2019, this particular Y-DNA test examined 111 Loci from direct paternal ancestors. As of Oct 2020, 340 matches were reported for all markers, about 60 of the individual testers had the last name Walker, many listed earliest known ancestor with name Walker. At the Y-111 level, there are 29 matches, two each at Gen Dist 2 & 3 and three at Gen Dist 4. Additonal SNP analysis on my sample shows postive on 54 SNP determinated I was in Haplogroup I-A7115. Only two of my Y-DNA matches have done this level of analysis and both of them are Walkers and also in Haplogroup I-A7115.

James Motheral Walker born 17 May 1834 in Tennessee and died 22 September 1895, Senatobia, Tate County, Mississippi. None of his three children had children, hence the closest of his family who have done autosomal DNA testing at Ancestry.com are three descendents of his sister and one of his brother. These matches are as expected for two 3rd cousins and two 3rd once removed cousins, (which also indicates brother is uncle, not father of granddad Arthur.)

From descendents of grandparents of James Motheral Walker, we also have many matches in the expected ranges for their relationship to me. These include about 22 matches from 7 children of Allen Walker and Esther McCrory and about 17 more from 6 children of John Motheral and Jane Currie. I have about 285 DNA matches in the Walker family on Ancestry.Com.

Testing at 23andMe in September has found 11 matches that openly show the Walker name, 115 that match with two known Walker relatives; one is a third cousin, the other his niece who is third cousin once removed to me.

While it is possible to image several theories to name the parents of Arthur Bowie 1881-1941, the simplest and most likely is that James Motheral Walker is his father and Caniza Reeves (Buie/Sullivan/Bowie) is his mother, who were neighbors but never married.

Y DNA Matching and Connecting with your Paternal Ancestor

Uncle Bobby Bowie wanted to connect to this Louisiana branch of Bowie. The fact that nothing has ever been found to support any connection is explained for the most part, by these DNA tests and studies of the Walker family.